For the second year in a row, Silicon Valley Forum had a chance to work with the top science university in Sweden, KTH Royal Institute of Technology,
in putting together a Swedish Startup Pitch Night, an evening with seven up-and-coming startups from Stockholm hosted by Spotify.

This year KTH brought seven up-and-coming startups from Stockholm to Silicon Valley to learn about the business ecosystem and meet with potential investors, partners and customers. At the end of the program, they participated in a special sold-out pitch night hosted by the Swedish unicorn company Spotify. 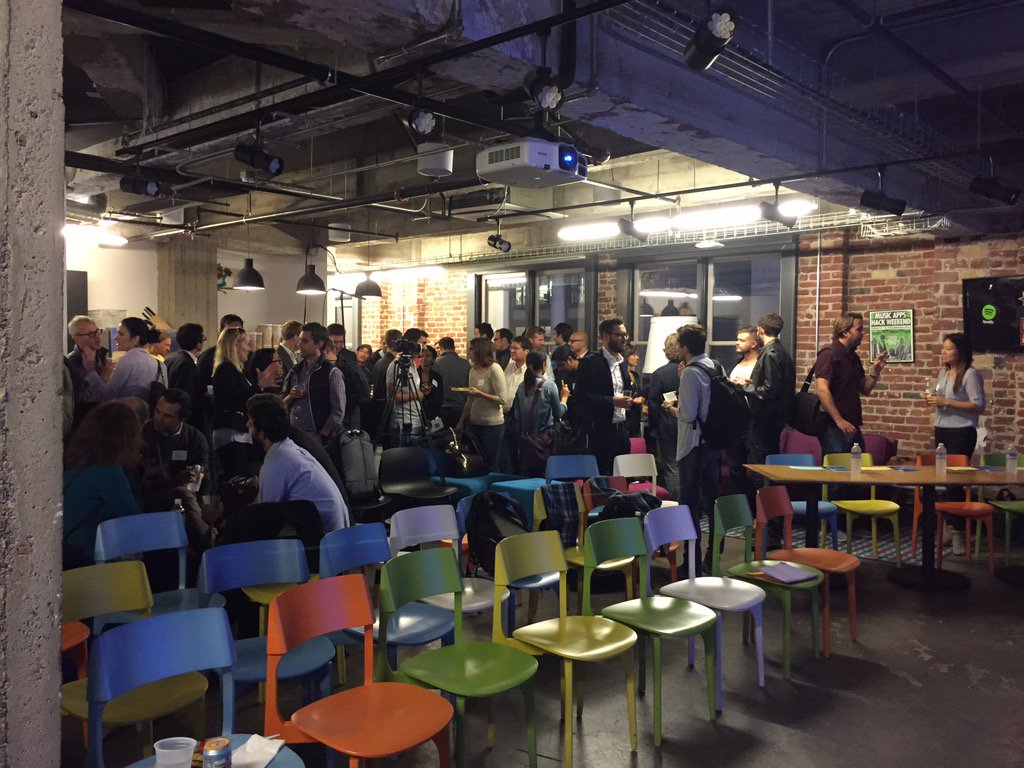 Our investor judges of the night included:

The evening started off with welcoming remarks from Erik Hartwig, Engineering Manager at Spotify San Francisco office. Thank you to Spotify for having us! 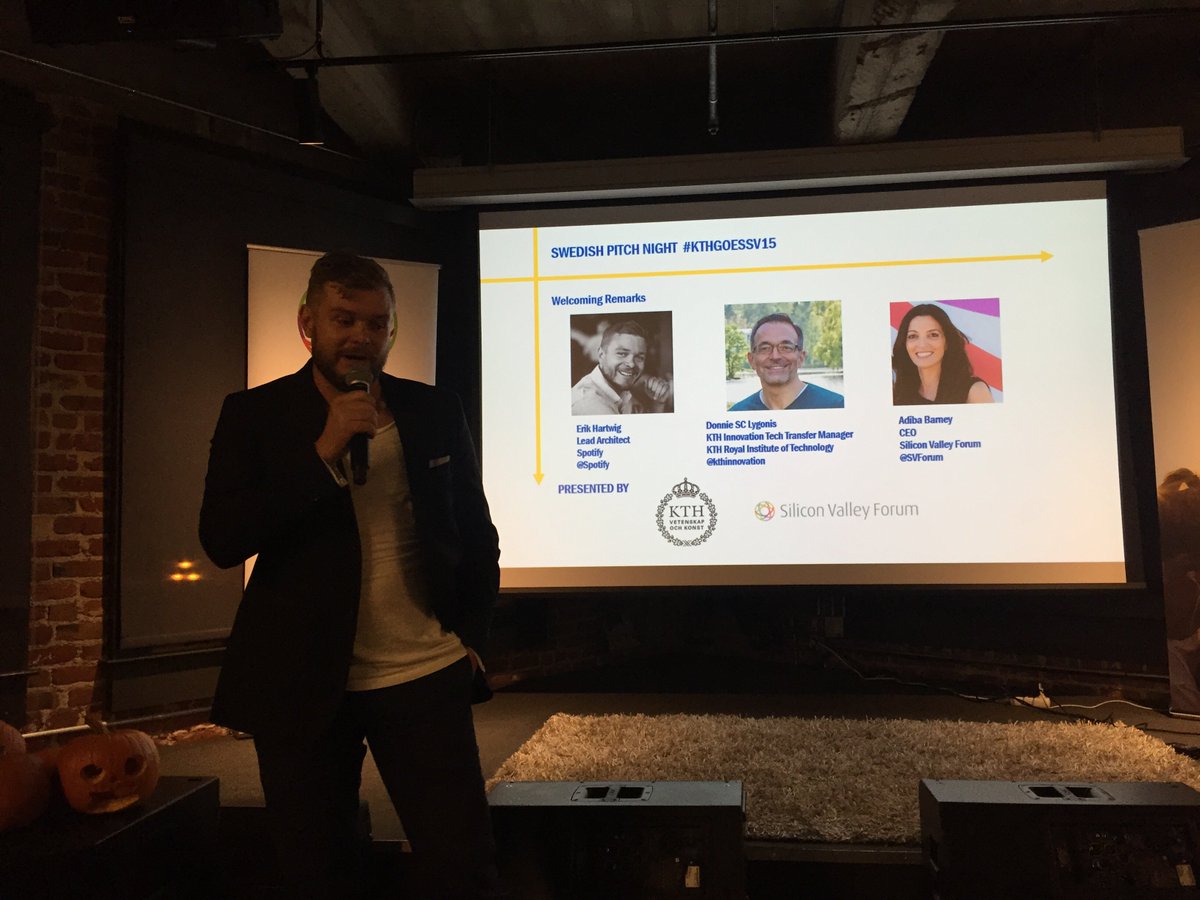 First up pitching was Preben Wik, CEO of Furhat Robotics. His company is building the world’s most social robot, and thewy wowed the audience with their Furhat “head”. Furhat is a revolutionary and unique robot head that uses back-projection technology and 3D facial animation to render a robot head with a humanistic, natural appearance. Imagine interacting with robots like you interact with humans! 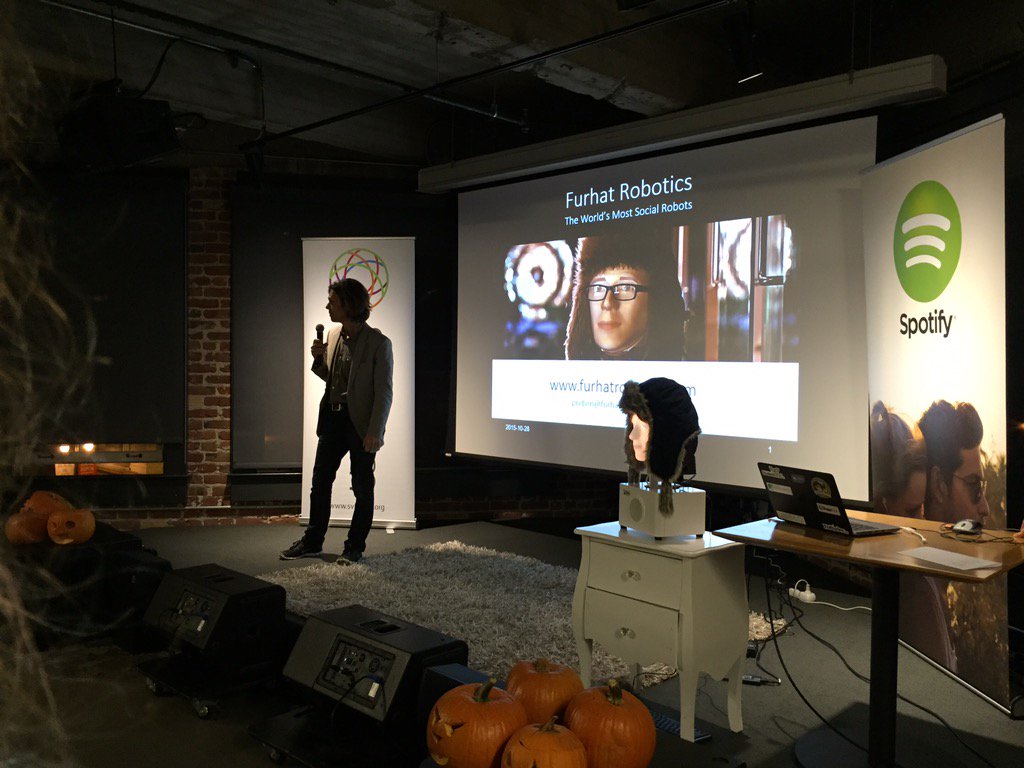 Second up to pitch was Arnrun Thorsteinsdottir and Kim Westin, Co-founders of Magnea. They are developing a product that motivate patients and the elderly to move around more by measuring the patients’ movements, quantifying the data into different activities and displaying the activity level to both the patient and medical staff. Magnea’s vision is to make physical activity as natural as pharmaceuticals or surgery when it comes to prevention and treatment within healthcare and eldercare. Sweden’s biggest eldercare company have already placed an order of 108 units from Magnea.

Third up to pitch was Philip Skogsberg, Co-founder and Head of Product at  Challenger Mode a web platform where gamers can compete against other gamers for money in competitive skill games. To play for prize money, users set up a challenge solo or team up with friends, then find opponents and play the match. Challenger Mode already has partners like Ninja in Pyjamas, Dreamhack, Sweleague and Stunlock Studios. 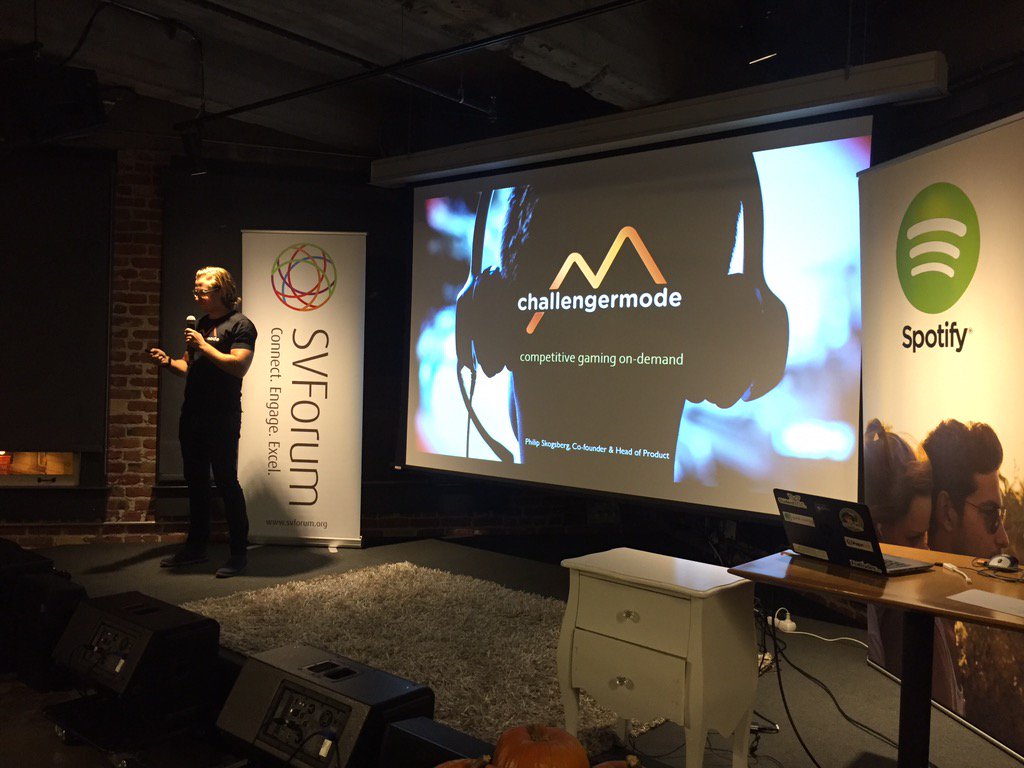 Fourth up to pitch was Jonathan Ilicki, CEO of Ortrud Medical, which helps nurses succeed with the most common invasive procedure in health care: needle sticking. They have developed an intelligent, environmentally friendly and cheap alternative to tourniquets used all over the world. 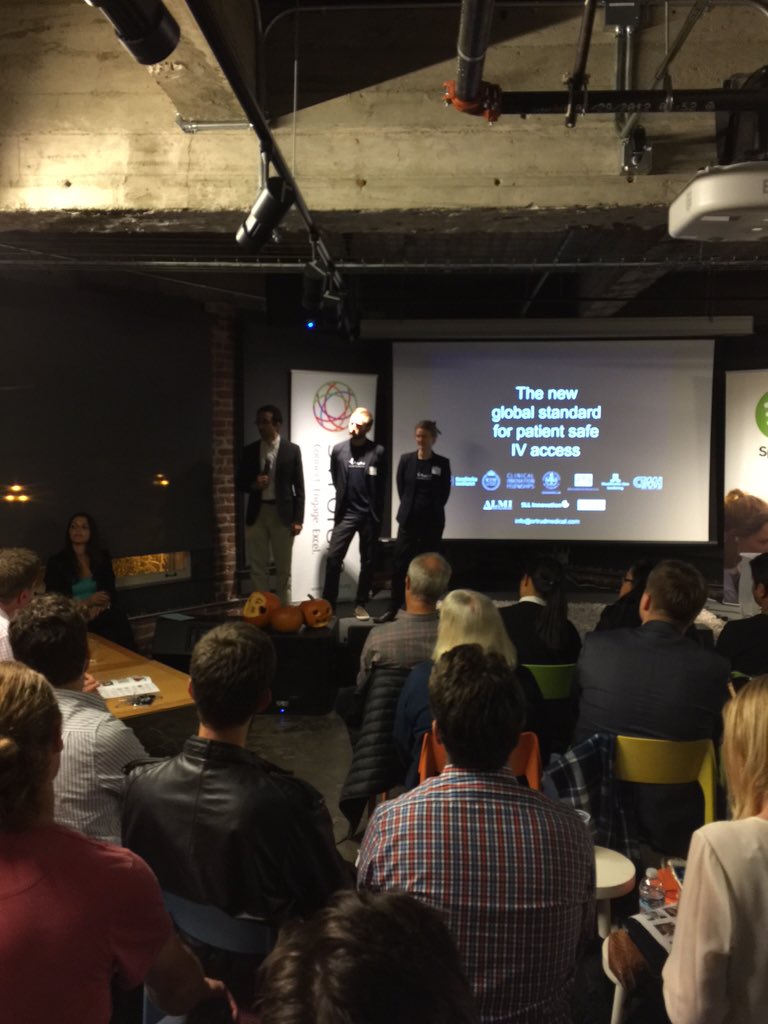 Next up to pitch was Adnan Causevic, CEO of CompleteTest which is a software solution for automated testing of critical safety software found in airplanes, medical devices, trains, spaceships and more. CompleteTest uses a complex technology requiring a high degree of expertise, but still offers a simple interface for its intended users. The process becomes less tricky and easier to learn, which will make things more efficient.

Then Daniel Carlman, Co-founder and CEO of ManoMotion took the stage. ManoMotion are developing software for real time 3D gesture analysis, which allows the user to interact with technology through finger and hand gestures. The software has applications in Augmented and Virtual Reality, wearable computing and smart devices. 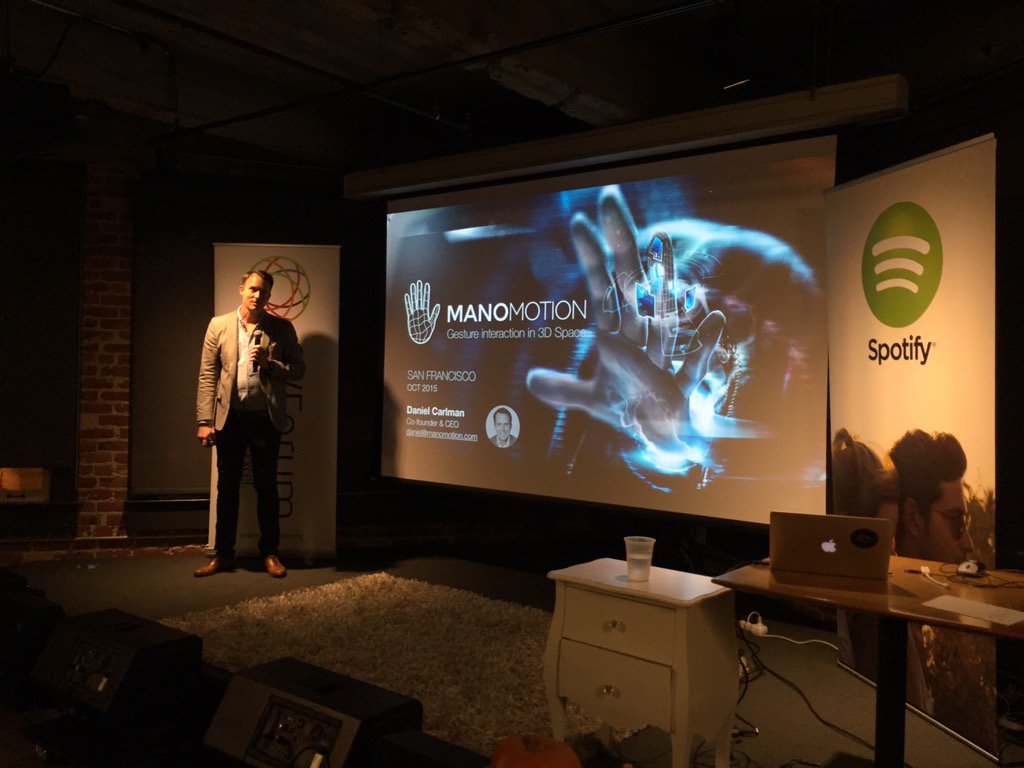 Last but not least was Kristoffer Skagerberg, Co-founder of Anchr which is a new app that redefines local search. Anchr gather all location based content from platforms like Facebook, Yelp, Foursquare and more, and put in one mobile app.Anywhere you go, Anchr will display everything any service is saying about the places around you so you can access the content you are interested in. Users can also add their own content.

Asking great questions and giving valuable feedback to the pitching startups, the judges also scored each pitch, and the winner of the Swedish pitch night was . . . Furhat Robotics. Congratulations!!!

Thanks to everyone who joined us this evening and a special thanks to our judges and host!

This website uses cookies to improve your experience while you navigate through the website. Out of these cookies, the cookies that are categorized as necessary are stored on your browser as they are essential for the working of basic functionalities of the website. We also use third-party cookies that help us analyze and understand how you use this website. These cookies will be stored in your browser only with your consent. You also have the option to opt-out of these cookies. But opting out of some of these cookies may have an effect on your browsing experience.
Necessary Always Enabled
Necessary cookies are absolutely essential for the website to function properly. This category only includes cookies that ensures basic functionalities and security features of the website. These cookies do not store any personal information.
Non-necessary
Any cookies that may not be particularly necessary for the website to function and is used specifically to collect user personal data via analytics, ads, other embedded contents are termed as non-necessary cookies. It is mandatory to procure user consent prior to running these cookies on your website.
SAVE & ACCEPT